Fundraising With (And Against) Friends & Family

The key to successful fundraising, as any good unqualified Boston marathoner or aspiring Boston marathoner knows, is to take as much advantage of your friends and family as humanly possible. Many a harrier has found his or her way to Hopkinton out of the kindness of some wealthy old relatives or a few bankrolling friends. But what happens when you have to share friends and family fundraising targets?

Welcome, dear readers, to the #ReillyWars.

First, a few details you need to know:

Now you’re all caught up to today. Meg and Ally are draining their shared relations dry as they try to meet the constant stream of fundraising deadlines. How best to raise money for a cause when you’ve got competition in your own gene pool?

1. Find your own networks!
Meg is joining some of Boston’s greatest connectors to host an event on March 6th (you should come! Network! Donate! Meet other great people!).

Meanwhile, Ally takes to the mean streets of Longwood Medical to encourage her professional allies to show their support. 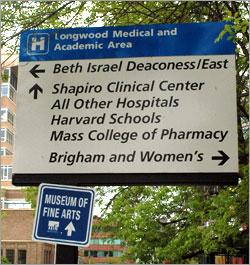 2. Use the force of familial guilt.
Remember, your parents love you AND your cousin. Feel free to both hit them up. They may say no, but you won’t know until you try.

3. Try teamwork!
Instead of always holding your own events, share the stress of planning an event and split the proceeds. For example, on March 8th, the #RunningReillys will make their way to Meg’s hometown of Taunton, Massachusetts, for a fundraiser. Are you coming? It’s at New England’s greatest Jimmy Buffett cover bar.

You should come. There will be music and prizes and food and fun. Or work together to encourage donors. Meg can make a mean apple pie, so she volunteered to prepare some delicious baked goods to her next $50 donor AND Ally’s. (Do you want a pie? Meg will make you a pie. For a price. The price of good liver karma!)

But they started the #ReillyWars to challenge each other – who comes out on top in a battle of cousins? They’re enjoying the back-and-forth, even if their followers may be exhausted by them. 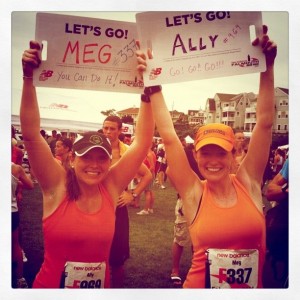 5. Ask everyone.
Between the two of you, you know a lot of people. Ask them all! In fact, Meg and Ally are asking you right here and now: Have you loved your liver today? Have you expressed that love in the form of a monetary donation to the American Liver Foundation (our fundraising page links below)?

Have you considered making a donation to a raffle or silent auction at one of the many fundraisers Meg and Ally have planned? If not, you should. They just asked. It would be rude to say no.

6. Remember the reason for your marathon season.
Why are we fundraising? To get to Hopkinton. Why are we fundraising for ALF? For Bob. While Ally only recently got to know Bob and his wonderful wife Rhonda, she quickly came to appreciate both of them, their love for their family and their zest for life. Meg witnessed Bob’s ongoing battle with liver disease from the start – and she can’t even express how amazing it is to have her uncle healthy and happy. The impact Bob has had on the lives of those around him is immeasurable – he’s an inspiration to anyone fighting a personal battle and a daily reminder that miracles do happen. They aren’t just running to run – they’re running for Bob. 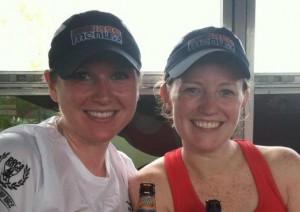 –Ally & Meg Reilly are cousins, runners, and incorrigible retweeters. They’re also members of Team RaceMenu. You can find them online at @areilly25 and @mreils, or at any road race with an afterparty.