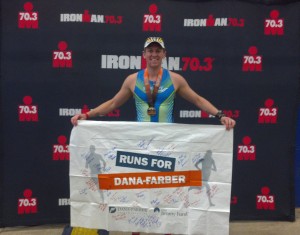 A little while back RaceMenu hosted a fundraising workshop, so I sat down with one of the attendees, Matt Schulze, a runner and competitor who is putting on the Ironman Silent Auction at Tommy Doyle’s in Kendall Square this Friday, April 26th, and got the inside scoop on his takeaways and his event.

Schulze, a WPI grad and a Townsend, MA native, got involved with Dana-Farber Cancer Institute after his first supervisor was diagnosed with cancer. Matt then joined the Boston Marathon Jimmy Fund Walk team, Team Paul “Pops” Doucette. In 2010, his grandmother passed away due to complications with melanoma, and thats when his dedication to these charities really took flight.

For 2013, Matt decided to participate in the Run Any Race Program; he added an Ironman to the top of his list of goals. He shared that, “Team Eleonore Rocks was a triathlon team that supports families of terminally ill children and its mission aligned itself with a lot of DFCI’s work, so I applied.” He will also be donating some of the proceeds to Boston Children’s Hospital in light of the tragic Boston Marathon events.

Matt chose a silent auction since there’s a direct benefit for everyone involved. “It isn’t just going out to dinner and the proceeds at the end of the night going towards a cause. I think folks recognize the time and energy you put into an event and when they see that you worked hard to acquire products/services that they would otherwise normally purchase, but benefit a noble cause as well, they feel more connected to ‘WHY’ they are spending their money.”

These are Matt’s four keys to fundraising success: 1) when, 2) where, 3) who and 4) how. He leveraged a ton of his relationships to cover any fees or costs that he might have run into when identifying where his silent auction was going to take place. When it came to auction items, he found it important to display a common theme to each donor he was approaching, so companies related to fitness in the Boston area were his first stop.

Matt told us that the biggest piece of advice and most helpful tip he took away from our fundraising workshop was that being organized and persistent are the two most important aspects of planning an event. “Loose strings can unravel the event if you let it!”

Matt’s advice for beginner fundraisers: “Make sure you are passionate about your cause. If you plan an event and it’s fueled by something other than altruism, then when things don’t go right, you won’t have determination to adapt & overcome.” Relating the last piece, be flexible and always ask for help.

Come out and see fundraising in action!