Since we’re athletes and race directors ourselves, we face a lot of the same ups and downs that you may face in your training or preparation for events. Every once in a while, one of the people who works at RaceMenu wants to share his/her experiences.

Today’s post is from Brad, who handles our financials, coaches track at Regis College, and has a marathon PR of 2:31:15.

On Sunday, August 26th my foot started hurting. It was just a dull ache. Maybe my shoes had been tied too tight. It was certainly nothing to worry about. For the rest of the week the pain kept coming, but still I was unconcerned. It was going away during the run, and “I’ve never had a stress fracture that got better through the run.” On Wednesday I had practice at Harvard, and I ran what may have been the best workout of my life. I even did an embarrassing little fist pump as I crossed the finish line on my last repeat.

In my excitement I decided that I was ready to commit to a fall marathon, so on Thursday I signed up for Baystate. That Friday I ran the final 5k of RaceMenu’s Summer Series because, why not, wasn’t I just crushing it? 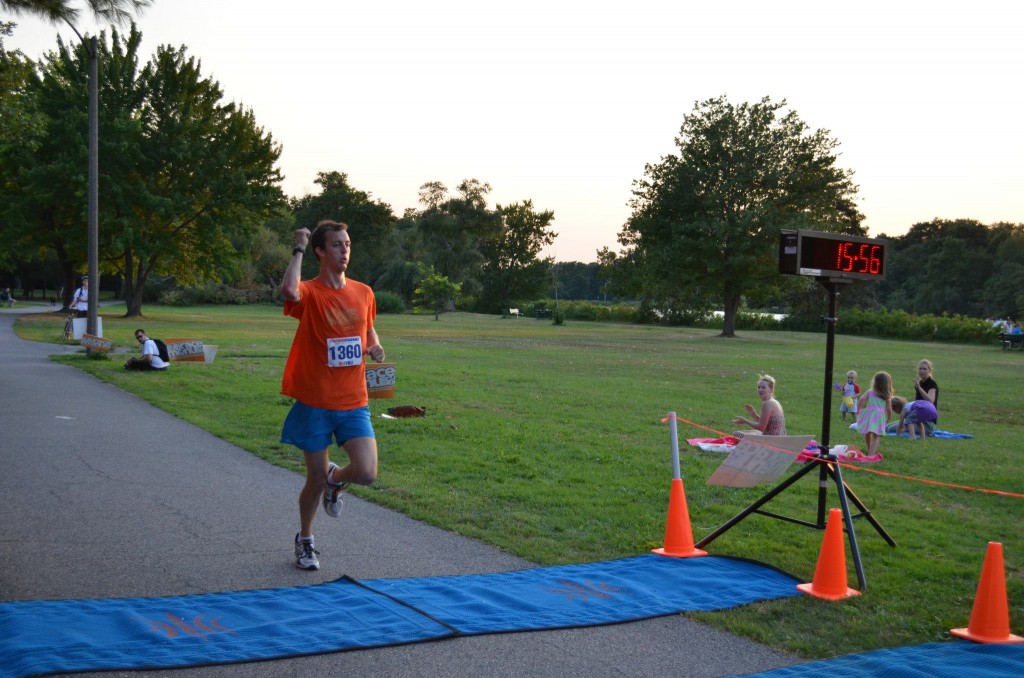 The following Monday I told some people that my training was going great and that I wasn’t having any injury problems… well except for this little foot thing. I haven’t run since.

I’ve been injured for over a month now. It sucks.

Athletes get injured. Every athlete of any significance has been injured before, and will almost assuredly be injured again. Iron men like Cal Ripken Jr. and Brett Favre may be able make the starting lineup for decades uninterrupted, but their longevity comes not from impervious musculoskeletal systems, but from becoming masters of taking the field with heads bloody but unbowed. It’s the nature of the endeavor. It’s the human condition. Icarus went after the sun, wax wings be damned, and we’re going to go after that 5k, 10k, or marathon PR. What’s the point flying if you’re just going to stay close to the ground?

Often times, the best you can hope for is to at least learn something from your fall. Icarus probably asked his father if he could make that next set of wings out of something a little bit sturdier. Maybe you can avoid the pavement a little more, or switch your shoes, or stretch. You’ve always said you were going to start stretching. But first there is the fall. Your dream may not die this publicly, and the stakes might not be as high, but it tears you up none the less. This can’t happen now. You were so close. You were in such good shape. That one glorious moment was right in front of you, and now it’s passing you by. You check the weather the day of your first DNS in ages and see that it’s perfect. It’s always perfect.

In the aftermath, you feel sick as all of your hard work slowly leaks away. You’re on the couch watching shows about finding old junk, selling old junk, and restoring old junk when you should be running. You have exchanges with coaches that look like this,

Brad –
Wanted to check-in and see how you are doing. Drop me a note when get a moment.
– Coach

blaaaaaaah. X-Ray negative, but bone scan on Tuesday. I cross train 3 times a week at Regis and then have to spend the rest of the week getting fat.
– Brad.

You pound out ersatz workouts on the bike, or in the pool, or on the elliptical. People at the gym look at you like there must be something wrong. Why are you doing so much sweating? You don’t know, or rather you do but you can’t explain it. You’re doing it because you have to. You’re getting old. Funny how that works. You always seem to be getting older, never younger, and although you might not have noticed it so much before, now it’s staring you right in the face. You’re twenty five or thirty five, but you hear that clock ticking loud and clear. The window is closing. Why me, why now? If you can just get back though, if you can hammer that bike so hard that it starts creeping forward across the carpet, then maybe …

You turn the corner. The pain has faded. Of course there’s still time. The start line is in sight, and it’s just as beautiful as any finish line you’ve ever seen. You buy new shoes, and you smile when the alarm goes off at 5:00AM. When you take that first step you’re cautious, but if you wanted to be cautious you would have taken up building ships in a bottle. Time to see if you’ve still got it, if there’s anything still there. God, you’re out of shape, but it’s a deep familiar burn. Welcome back old friend!You make it back to your driveway, and you exult in your accomplishment even though your body’s a dilapidated caricature of its old self. The comeback is on.

If we are Icarus as we plummet back to Earth, we are Sisyphus as we toil.  I am injured now, and you may be injured too, but as soon as we get back we’re going to push and push and push, even though we know that the stone will eventually roll back on us again.

I think about Sisyphus and myself. He’s never going to summit that hill, and I’m never going to win a gold medal. So what’s the point? Why, every time when the rock is at the  bottom of the hill and we’re standing there with our hands on our hips, staring down at it, do we decide to go down and get it rather than moving on without it? Well, because even though we can’t roll the rock over the top, we can get it closer. One second faster, one inch higher.

It may not seem like a lot, but you know when you get there, that rarefied air is so sweet – oh and the view! Onward you go. If high is good, higher is better. More. More! The rock is getting heavier. Your fingers are slipping, and your arms are shaking.. You take last one peek around its edges to see the promised land and then you can’t hold it any longer.

It goes away just like it always does. You renew a gym membership. You make a doctor’s appointment. A kind old friend sees you punishing yourself on the elliptical and tells you that maybe it’s time to get into other things, and you smile. They don’t know the secret. This too shall pass, and then… We will run faster, stretch out our arms farther. . . . And one fine morning—-

I am injured now, but some day I will be well.

When I get better, I’m thinking about visiting the sun.

Maybe I’ll see you there.