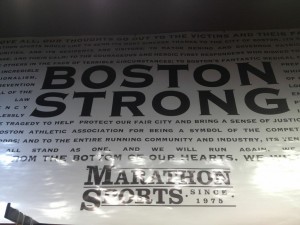 The weather was perfect last night for the return of the Marathon Sports Wednesday Night Run Club to the Boston location at 671 Boylston. 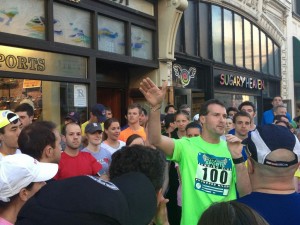 Shane gives directions for the run. 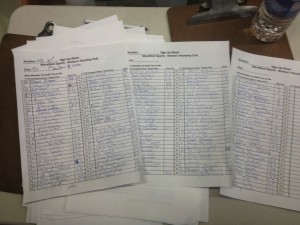 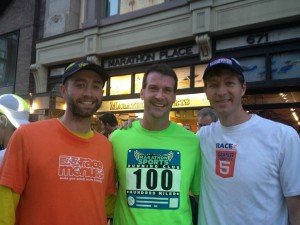 Brendan & Alain with store manager Shane after the run.

I did not set a PR. I did not win. I took a breather on the Newton hills. My MarathonFoto pictures show more than one image of me walking, not running. Those points aside, Monday, April 15, 2013 was one of the best runs of my life. I spent four hours, three minutes, nineteen seconds surrounded by people who love running, being cheered on by people who love runners, in a city wholly focused on what it means to run 26.2 miles.

I’m a charity runner. I run for a charity, the American Liver Foundation, and the marathon lets me show up in Hopkinton because they’re charitable people. I will never win. I will possibly never qualify. But I will never give up the hope that I might, at the very least, achieve the latter. When I toe the line in Hopkinton, I’m thinking not of laurel wreaths, but of the stories of the people who surround me. I think about why I run and I think about the people who get me to the line. Mostly, I think about the people who can’t run, and how I can run for them. To say the starting line is an emotional place for me would be an understatement.

In truth, there are 26.2 miles of emotions in every marathon, but this is especially true at the Boston Marathon. On Monday, I felt a million emotions for my entire four hours, three minutes, nineteen seconds.

There was sadness at the start, thinking of a Liver teammate who lost her father just days before, combined with a hope that she would find solace in the hills of the course. There was sheer joy at the clear skies and cool breeze, compared to last year’s inferno. There was the nervous energy, the questions, the “am I ready for this” that I imagine every charity runner faces at 10:40am. There’s the anxious scanning of the crowd, looking for my fans, my spectators, and the thrill and relief of seeing my cousin in the Newton hills. The elation, seeing so many friends along the course, knowing that for every familiar face I saw, I probably missed two or three. I ran smiling. I was exhausted by how hard I was smiling. I thanked law enforcement and volunteers whenever I could, shouted support to other charity runners as they passed me, and fell in love with over 26 miles of spectators: their enthusiasm, their support, their joy. If I walked, they made me run. I felt weak, they told me I look strong. I struggled, they made me persevere.

Monday, April 15, held the most joyful four hours, three minutes, nineteen seconds of my life. I will never forget the excitement of seeing a friend’s athlete tracker stats, nearing her PR. I can’t seem to shake the roar of the crowd or the smiling faces I passed. I still can smell the smoke from the grills that must have lined all of Beacon Street, cookout hosts feeding their hungry, happy guests. I keep thinking about the t-shirts my fellow charity runners wore, “I’m running for ___,” that made me remember for whom I run. Mostly, I spent four hours, three minutes, nineteen seconds thinking one thought, the same thought I had when I crossed the finish line at 2:47pm: “I am so lucky, I am so lucky, I am so lucky.”

I had no idea.

Today, I still feel so lucky, but for such different reasons. Today, I struggle to understand why or how this could happen. I run the numbers, seeing how many minutes’ difference could have changed my fate. I wonder how any of us can keep moving forward.

And I remember: we are endurance athletes. We endure. 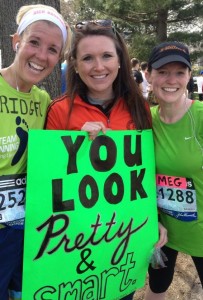