I’m not as voracious a reader as I once was. Many of my friends are the same way.

We all make excuses for it, of course. “I’m too busy!” is a good one – people nod and commiserate. There are plenty of other things that take precedence: job, family, exercise, sleep, LOLCat memes. The list goes on.

There are some books that really make it hard to use those excuses, though. These are some of my favorite running books. I’m not talking training books (Daniels, Lydiard, etc) here – it is summer, so I’m talking beach books. The kind that are easy to get into and that will make you wanna head out for a run right after.

ONCE A RUNNER, by John L Parker, Jr. 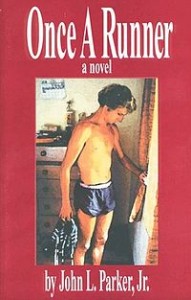 The classic running book. “Once A Runner” gives you a look into the life of fictional character Quenton Cassidy. I’m convinced there are people out there that only thumb through it to find a quote to put on their Facebook profile. I can’t really blame them – there are some phenomenal ones.  A little cheesy at times, but an inspiring, quick read. Believe it or not, people were offering to sell their copies for outlandish prices (in the hundreds!) on the LetsRun and Runner’s World forums in 2007 when this book was out of print. Never fear – the book publisher got wise to it, and has re-released it.

Takeaway quote:
“Running to him was real; the way he did it the realest thing he knew. It was all joy and woe, hard as a diamond; it made him weary beyond comprehension. But it also made him free.”

BORN TO RUN, by Christopher McDougall 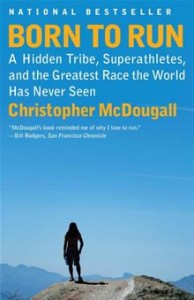 This book has the label as the “barefoot running” book – but it is a lot more than that. Sure, it does give you the story of why he made the move to minimalist shoes, but that is really secondary to the tale of community McDougall discovers among runners – especially ultra marathoners.

Takeaway quote:
“Distance running was revered because it was indispensable; it was the way we survived and thrived and spread across the planet. You ran to eat and to avoid being eaten; you ran to find a mate and impress her, and with her you ran off to start a new life together. You had to love running, or you wouldn’t live to love anything else. And like everything else we love-everything we sentimentally call our ‘passions’ and ‘desires’-it’s really an encoded ancestral necessity. We were born to run; we were born because we run.”

RUNNING WITH THE BUFFALOES, by Chris Lear

This was the first book I’ve ever read about cross country. I had never seen anyone write about XC (except this great article from the Philadelphia Inquirer back in 1979 that my high school coach used to share). I ran cross country in college and read this in the summer between junior and senior year when I was doing the most weekly mileage I’ve ever run. It really got me excited for the upcoming season.

Takeaway quote:
“In many ways, a race is analogous to life itself. Once it is over, it can not be re-created. All that is left are inpressions in the heart, and in the mind.”

I was given this for my birthday a few years ago, and it was a pretty good read. Haruki talks about his own training in preparation for the New York City Marathon and how he works it into his life as a writer. I think I liked it mainly since during a few spots in the book he talks about running on the very paths and roads I train on along the Charles River in Cambridge.

Takeaway quote:
“I’m often asked what I think about as I run. Usually the people who ask this have never run long distances themselves. I always ponder the question. What exactly do I think about when I’m running? I don’t have a clue.”