More and more events are utilizing RaceMenu’s team functionality to help grow their registrations, so we’re going to start highlighting teams from different events on the blog. Think your team or a team in your event should be featured? Let us know in the comments below, on Facebook or Twitter, or by sending us an email!

This past October, the Charles River Conservancy wanted to spread the word: underpasses NEEDED to be added to the construction projects for the bridges along the Charles River. Runners were an obvious ally in this effort – so many athletes flock to the pathways along the river for training & commuting. We featured a blog post about the CRC’s efforts which resulted in 400 emails in less than 4 days to the governor; the letter writing campaign ended with over 1500 petition signatures (wow!). CRC’s advocacy efforts have resulted in design changes by MassDOT to reserve space for future underpasses.

To keep the conversation going, the Charles River Conservancy has formed teams at the Run Against Cancer Events’ 5K Summer Series races. They reached out to the supporters of the petition who had identified themselves as runners & let them know about the race. (Good use of their network!) Having the team all decked out in their matching “Team UP” t-shirts generated a lot of interest for the Charles River Conservancy’s underpass advocacy campaign. 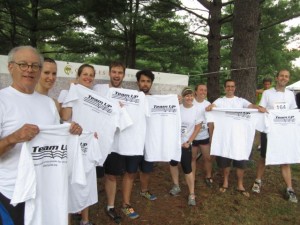 If you want to join Team Underpass for the August 8th race, Register here and select “Team Underpass” from the team option. If you’re already registered for the 5K as an individual, but would like to change your team affiliation to Team Underpass, you can make that request via email to support@racemenu.com.  All members of Team Underpass will get a t-shirt to wear during the race (if you like).

Whether you plan on registering to run with Team Underpass, or attending the event to cheer on the runners, please email phoebe@thecharles.org with your t-shirt size so they can make sure enough are on hand.